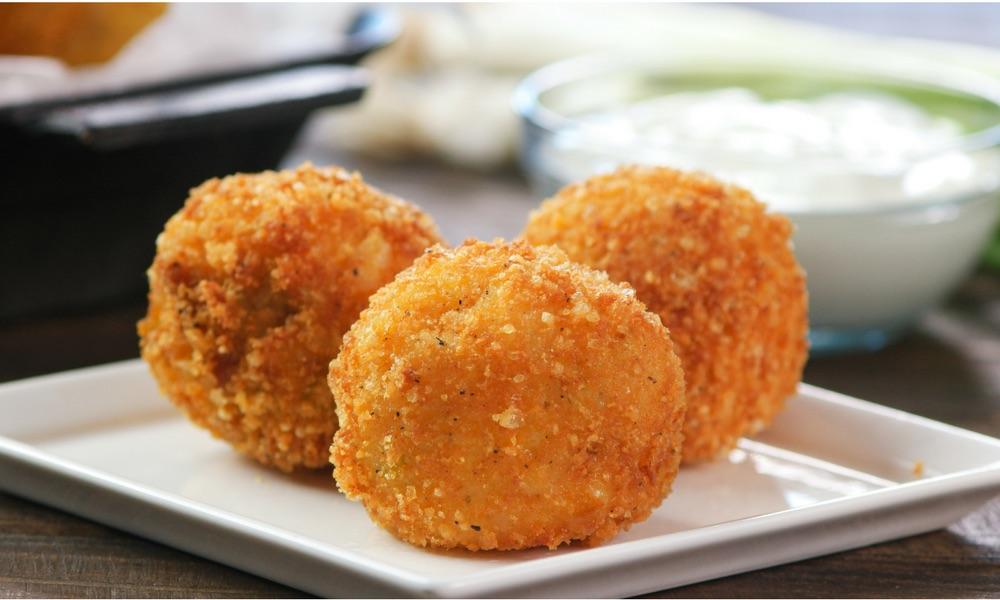 This simple dish was called “Potatoe Balls” in the 18th and early 19th centuries and an original recipe for this dish appears in Mary Randolph’s cookery book The Virginia Housewife published in 1824. These croquettes are a good way to use up leftover mashed potatoes. While the base recipe is simple, feel free to add spices or herbs to your liking. Nutmeg, imported from the West Indies, was a common ingredient in early American kitchens—even in savory preparations. Minced chives are a good addition as is grated cheese—1/2 cup of grated gruyere or 4 tablespoons soft goat cheese are two choices. 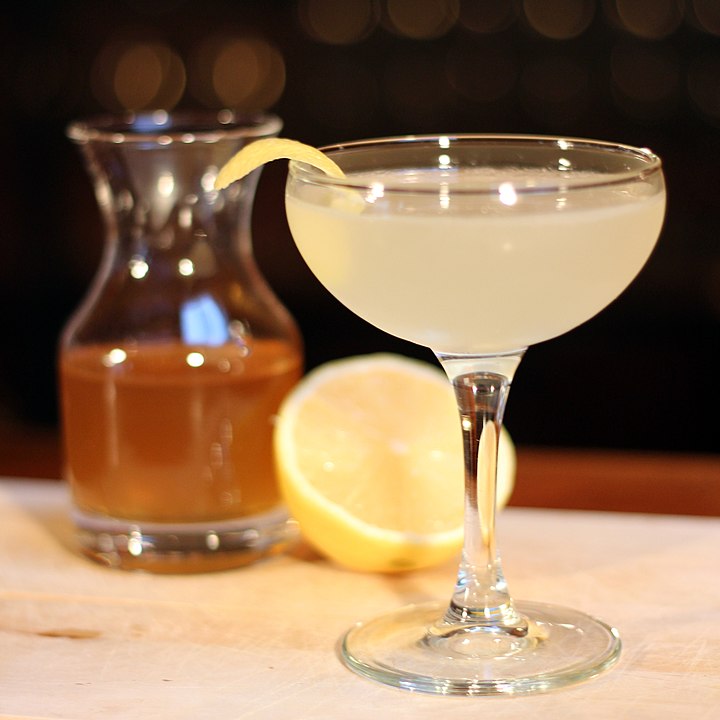 This cocktail was popular one hundred years ago during the Jazz Age. The sweet-sour combination was ideal to mask the taste of the harsh “bathtub gin” brewed locally or at home in defiance of Prohibition laws.

For the Honey Simple Syrup:

1. Make the Honey Simple Syrup: Bring the honey and water to a boil in small saucepan over medium heat, then lower to a simmer. Simmer until the mixture is reduced by half to form a syrup. Set aside in a sealed container, preferably glass.

2. Make the Lemon Twist: Take a potato peeler, sharp paring knife or small channel knife and peel a narrow strip of rind around the lemon crosswise. Place the strip on a flat surface, pith side up, and roll away from you in tight coils—as if rolling a rug. Uncoil and use in your cocktail as a garnish.

3. Make the Cocktail: Add the gin or vodka, lemon juice, honey simple syrup to a shaker with ice and shake well. Pour into a champagne bowl or martini glass and serve with the lemon twist, if desired. Alternatively, you may mix the ingredients in one tall glass and pour over anther tall glass filled with ice. Pour into a martini glass or champagne bowl using a strainer. Serve with the lemon twist, if desired. 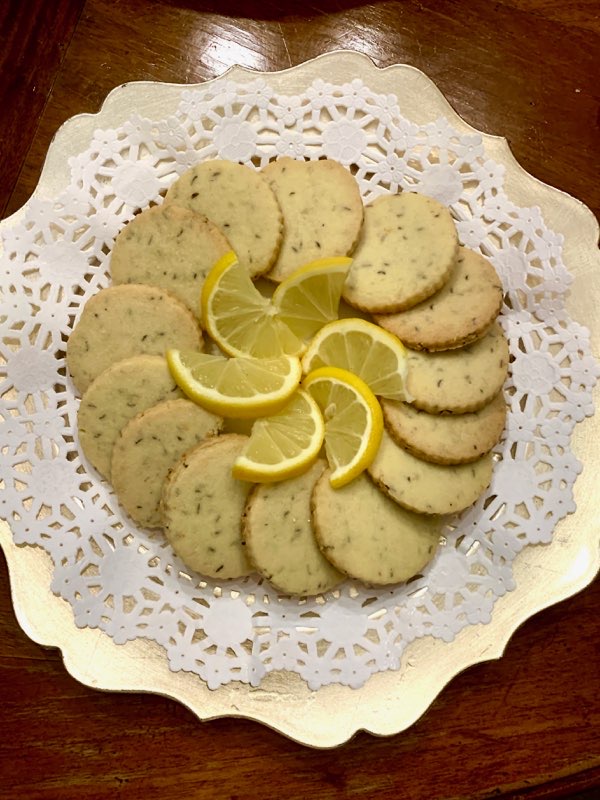 Named for a town in England in the county of Shropshire bordering Wales, the Shrewsbury biscuit is essentially a shortbread cookie. Carried to America via early colonists this cookie was commonly flavored with caraway seeds which impart a faint licorice taste. If you don’t like caraway, you may simply omit it.

2. Cream together the butter until fluffy, about 3 to 4 minutes in a stand mixer. Add the egg and beat until well combined.

3. Slightly crush the caraway seeds in a mortar and whisk into the flour along with the lemon zest. Add the flour to the butter and egg mixture and mix until it comes together in a ball. Wrap in plastic wrap and refrigerate for an hour.

4. Flour a clean work surface liberally and roll out the dough to ¼ inch thick. Use a 2-inch round or fluted cookie cutter to cut out the cookies and place on the cookie sheet about 1 ½ inches apart.

5. Bake for about 10 minutes or until they begin to brown slightly around the edges. Remove and cool before serving. 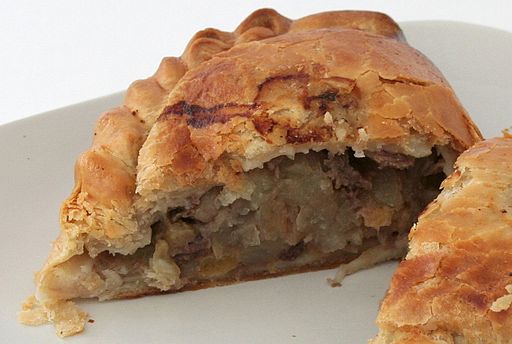 While it’s not definitively clear when meat turnovers were invented, meat pies have been referenced in a 13th century royal charter by England’s King Henry III and 14th century French cookbooks, which referred to the encompassing dough as paste. This is likely where the word “pasty” came from.

In earliest versions, a stiffer version of the pastry dough itself served as a baking container for the meat filling. These later evolved into the popular “standing pies” which were eaten into the 19th century. The dough in these weren’t usually eaten because they were too tough. This standing pie dough was also called a “coffin”.

As the pasty moved through the centuries, it became a go-to street food or fast food of days of yore. In English versions, potatoes, carrots and other ingredients joined meat in the pie so they ate like a full meal. The most well-known of these is the “Cornish Pasty” a popular, one-handed food for miners in Cornwall. As England expanded her colonial reach, outposts of the empire adopted the pasty and made it their own. The best example of this is the popular Jamaican Beef Patty.

1.     Melt butter in large fry pan over medium heat and add onion, carrots and celery. Fry until onions are softened, about 6 to 7 minutes.

2.     Stir in the ground beef, breaking apart the chunks with a wooden spoon and fry until browned, about 10 to 12 minutes.  Stir in the allspice and nutmeg and cook for 1 minute. Mix in the tomato paste and stir well, cooking for 1 more minute.

3.     Add the Madeira, port or sherry, and cook for 1 minute while mixing. Add the Worcestershire sauce and ½ cup water.

5.     Assemble the pasties, Method 1: Hold a puff pastry square like a diamond. Lightly roll with a rolling pin to thin slightly. Brush all edges with egg wash. Place roughly 1 to 1 1/2 tablespoons meat mixture on one side. Use as much filing as will fit comfortable a puff pastry square.  Fold the unfilled side up and over the meat mixture to make a triangle shaped turnover. Press down with a fork along the edges to make a seal. The egg wash will help. Repeat until all the pastry squares are filled.

6.     Method 2: Using empanada disc, use a rolling pin to roll out the discs so they are about 25% larger all around. Fill as you would a puff pastry diamond—but these will be half-moon shaped. Place roughly 1 to 1 1/2 tablespoons meat mixture on one side of the disc. Fold the side without filling up and over  the meat mixture to make a half-moon shaped turnover. Press down with a fork along the edges to make a seal. The egg wash will help. Repeat until all the discs are filled.

7.      Method 3: Line a greased cupcake tin with the empanada discs and gently press into place. Fill  each tin ¾-full with the meat mixture. Gently fold over the overhanding dough. Use a 3-inch round pastry cutter to cut circles out of another empanada dough disc. Brush one side with egg wash and gently press onto the top of the filled cupcake tin.

8.     Method 4: Roll one recipe pie crust (below) into to a rectangle of 10 inches wide by 15 inches long. Cut into eight squares. Brush all the edges with egg wash. Hold the square like a diamond and place roughly 1 to 1 1/2 tablespoons meat mixture on one side.  Fold the side without filling up and over  the meat mixture to make a triangle shaped turnover. Press down with a fork along the edges to make a seal. The egg wash will help. Repeat until all the pastry squares are filled.

9.     Prick each finished pasty with a fork and place on a parchment-lined baking sheet. Chill again for 15 minutes.

10.  Preheat oven to 350 F. Brush each pasty with egg wash and bake the pastries for 15 to 30 minutes or until the crust is risen and golden brown. Serve hot.

1.     Place flour and salt in a food processor and add the butter. Pulse lightly until you have a crumbly mixture. Alternatively, you may do this in a bowl using a pastry cutter or a sturdy fork to break up the butter in the flour and achieve a crumbly consistency.

2.     Add ice water in small amounts (not more than 2 tablespoons at a time) until the dough just comes together without being dry.

3.     Wrap the dough in plastic wrap and chill for at least ½ hour before using. 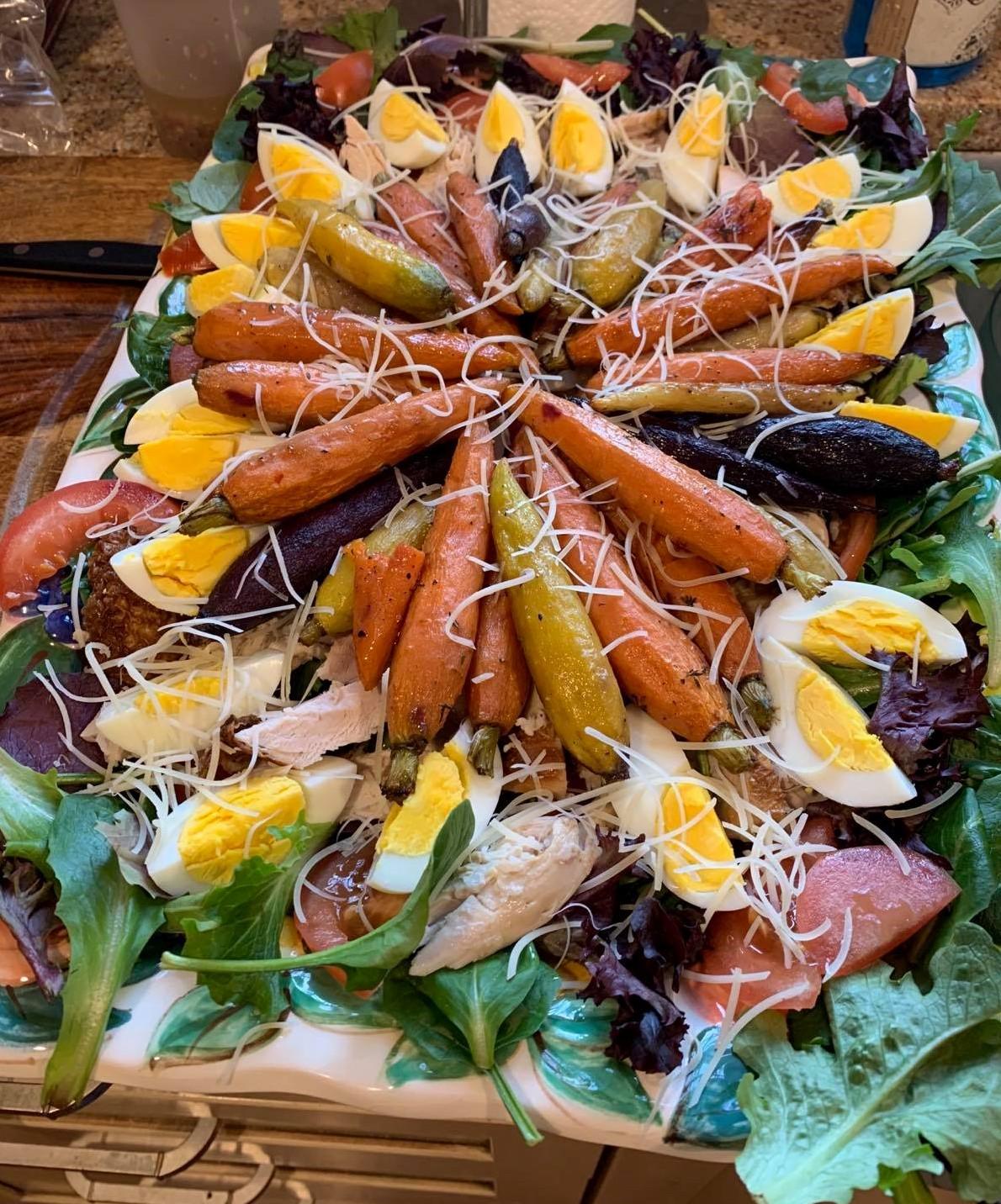 Salmagundi was a popular dish in 17th and 18th century America, although it has its origins as far back as the 1500s. Essentially, Salmagundi is what we would call a “composed salad” today— a salad the eats like a meal.

﻿In addition to lettuce, Salmagundi features meat of some kind as well as various vegetables. Cheeses, fruits, nuts and edible flowers may also be included.  The dressing is always oil and vinegar based. You can use any oil and vinegar combination you like–including using the reserved fat from cooking pork bacon, if you use it in the dish.

The recipe for salmagundi can be as long or as short as you make it—it all depends on the different components you want to add. It’s a perfect dish to use up leftover vegetables or meats. Our recipe for salmagundi is one presented at the museum during our Washington birthday dinner Ale to the Chief and other colonial-themed food events, but you may substitute any of the ingredients for those you prefer. This recipe calls for a chicken to be roasted, however you can also purchase a pre-roasted chicken. We like the ones from our friends at The Fresh Market.

1.     Roast the chicken if making from scratch: Preheat oven to 400° F. Place chicken in a baking dish and rub all over with the olive oil. Season generously with salt and freshly ground pepper and roast the chicken for 1 hour or until the internal temperature registers 165° F when thermometer is placed into the thickest part of the thigh. You may also test if a chicken is done by  piercing the thigh with a sharp knife. If the juices run clear it is cooked through.

3.     While the chicken is roasting, roast the carrots. Place the carrots in a large bowl and add the olive oil, salt, pepper, cumin and thyme and toss well so the carrots are fully coated. Spread on a sheet tray and add to the oven on a separate rack from the chicken. Roast for 30 to 35 minutes or until browned and fork tender. Remove from oven and set aside.

4.     Hard boil the eggs: Place the eggs in a saucepan with enough water to cover by 2 inches. Bring to a boil then turn off the heat and cover. Allow to sit until cool. Peel when cool enough to handle and cut each egg in half lengthwise and then each half into three wedges. Set aside.

5.     Arrange the bacon on a sheet tray and place in the oven with the chicken but on a different rack. Cook until slightly crispy—about 15 minutes for pork bacon and 10 minutes for turkey bacon. Remove from the oven and allow to cool slightly and crumble. Set aside. If using pork bacon, you may reserve the bacon fat for the vinaigrette if you wish.

6.     Arrange the lettuce leaves on a large platter and add the roasted chicken on top. Slice the tomatoes in half, if using grape tomatoes, or into small wedges if using beefsteak or other tomatoes and arrange around and on top of the chicken. Repeat with the cucumber and onion slices on top of the tomato slices.

7.     Next arrange the hard boiled eggs in a pattern on top of the salad with the roasted carrots in between and sprinkle the bacon pieces on top. Last, sprinkle on the cheese and almonds, if using.

8.     Make the Vinaigrette: Place all the ingredients in a small, sealable jar and shake vigorously. Spoon, as desired, over Salmagundi before serving. Arrange edible flowers, if using, over top of platter.