Michael originally hales from Jonesboro, Arkansas and Sewanee, Tennessee. He spent 4 years in graduate school in New Haven at the Yale School of Drama/Yale School of Management, then took 7 years in California, and returned to Connecticut about 3.5 years ago when he was hired to work at the Westport Country Playhouse. Now living in Trumbull with his wife and young son, he normally commutes to the Playhouse for his work.

“Along with Playhouse Artistic Director Mark Lamos, I am the co-CEO of the organization. Mark is primarily responsible for the artistry and mission of the organization, and I’m primarily responsible for the institutional side (and of course there’s often 100% overlap between those areas). I spend a lot of time fundraising (about 50% of our operating expenses come from contributed income) and in the balance of my time I concentrate on the strategic direction of the theater as well as our day-to-day operations.

There is no historical corollary to the devastation that the live performance sector is facing as a result of the COVID-19 pandemic. We went from planning to produce a 5-play season to producing nothing live onstage overnight. That means half of our income, as well as our primary mission expression, disappeared. As has happened in so many small businesses, we determined to furlough our entire crew and about half of our staff. We’re producing online content, mostly items that are about theater or theater performance but no full-scale streaming of plays and musicals (which are, at least at present, financially cost prohibitive). We continue to work in service of our community, but we aren’t designed to be flexible or to do this particular thing—we’re set up to produce a series of live in-person messy theater performances… which we can’t do until people are willing to gather in groups again. It’s an awful time for theater institutions and theater artists. I read somewhere that more than 90% of theater artists are now unemployed. That will have knock-on and echo effects in our field for decades. I think we’ll be talking about the impact of this pandemic on the American theater for the duration of my career and beyond.

We have to adapt to the moment and prepare for the future, and we’ve started to do that. So much of the field has the disadvantage of being on a year-round season, which means that the pandemic hit right in the middle of their 2019-20 plays and it doesn’t look like we’ll be back to normal in time for the regular kickoff for their 2020-21 seasons in the fall. The Playhouse operates on a bit of an oddball schedule, April to November, because of our prior history as a summer stock theater. So, the timing was, to the extent there is any upside to any of this, better for the Playhouse than for most of our peers. We have given ourselves the gift of remaining in this in-between place (reduced staff, online production, etc.) for almost a full year, and if we can pull it off we will have done so thanks to the generosity of our audiences, donors, and trustees. Many regional theater organizations are desperate to get back into production so they can open a season in October. I know if I thought we had to be back in rehearsal and onstage in front of an audience before Thanksgiving I would be behaving differently, and wouldn’t be thinking about much in the longer term, certainly not as far off as April 2021. I know of a prominent West Coast theater that is trying to create a social-distancing plan for their large space, and determined that they can only fit about 80 people into a 700+-seat theater. And I don’t know of a single public health expert who would say it’s unequivocally a good idea to sit in a confined space for two hours at a stretch, even six feet away from everyone else. And what happens at intermission when the line at the Ladies Room winds across the lobby all the way to the box office? Harvard A.R.T. is working with Harvard’s school of public health to come up with guidelines and logistics for audiences, artists, and production personnel to experience live theater while COVID-19 is still a going concern. There are really smart people trying to make this in-person art form work during a time that experiencing a play live with strangers could mean a death sentence. But at least at the moment, I think most of what will enable us to produce theater in front of live audiences again (or prevent it) will depend on exogenous forces more than anything we can cobble together as organizations or even as a field. Without at least an effective treatment for the virus, and at best a vaccine, we will not be able to return to anything resembling status quo ante.

I’m trying to enjoy the extra time for streaming, reading, and projects around the house. I appreciate the time with my wife and son. In some ways, I feel Mark and I may be in better communication with our trustees than we’ve been at least since I’ve been in the job. But I understand the urgency that so many folks have to get out and participate in normalcy again. Americans hate not having a choice, and I certainly feel some of that tugging on my soul. I would love to see a play in a theater again. I’m tired of screens.

I would love to see a play in a theater again. I’m tired of screens.

Jim Marpe and his team have done a great job handling this crisis in Westport, and my first selectman Vicki Tesoro and her team have done a great job in Trumbull. I think the biggest difference culturally between Westport and Trumbull with regard to COVID-19 is that Westport had that super spreader event at the party very early on, so the pandemic came home right away. I think it’s why you see the petition asking Jim not to open up the beaches and parks in Westport too soon; people in Westport had early and personal contact with infected people, included people who died of the disease. In Trumbull, I think, on the whole, we may be a smidge closer to the folks you see on television on the Florida beaches, wondering why we all have to stay at home when we don’t even have that many cases in town and many people don’t know anyone who has contracted the virus or died as a result. Shared sacrifice is a really tough thing to ask people to do, and even more difficult to enforce. I think we have to be compassionate towards people who are feeling stressed socially and emotionally while maintaining a fact-based approach to stay-at-home orders and any easing of restrictions.

On a Zoom call early on in the pandemic, one of our most knowledgeable trustees compared the enforcement of restrictions in some states but not in others as “having a peeing section in the swimming pool.” People who live in states like Connecticut that have strict stay-at-home orders and got them in place reasonably quickly are going to feel like we’re being punished while the rest of the country opens up. But the experts say that the second wave will be more significant the more we prematurely open up, and I think we have to believe them. My family and I will certainly continue to avoid large groups and unnecessary trips to stores, etc. until we have reasonable assurances that it’s actually safe.

As much as I hate screens and long for a return to in-person communication, this has been a great excuse to get back in personal touch (outside of a social media environment) with my network of friends nationally and internationally. I watched a streaming play from The Public with a friend from Peru, I caught up on Google Duo with an old pal from Kentucky, I played a board game (poorly) online with some friends from college. I hope that I can carve out time to continue that kind of intentional outreach and conversation even after coronavirus. But certainly, my access to a broad network of friends has been a great help in terms of coping with these unique circumstances.

My greatest hope is that we are reminded of our shared humanity; when we return to some semblance of normalcy, we carry with us a feeling of camaraderie and community that was absent as we all hunkered down in our homes.

My greatest fear is that we liked the way things worked during stay-at-home, or we got used to the way they worked, and we carry that way of working forward in a way that supplants our feeling of shared humanity. I don’t mean that people won’t do more on Zoom post-COVID-19 than they did before (they will) but rather that those meetings will continue to stand in for most of our professional in-person social interactions. Getting stuck on our screens is a real danger, because in so many ways it simplifies logistics. We need to remember why the logistical difficulty of arranging in-person gatherings is worth the trouble.

I am here to remind you why the Playhouse is important. I don’t think of my job as convincing people most of the time; I’m reminding you of something you already know. My mantra is “if the Playhouse did not exist, we would have to build it.” You may not see a performance on our stage until next year, but reach out to us, reach out to me, participate in the programs we’re putting out in the world, support us with a monetary contribution if you can. I will be here when the smoke clears, and I can’t wait until that day when we open the front doors onto the patio in full bloom and invite you back into our sacred space when we can share stories in this very special way again. 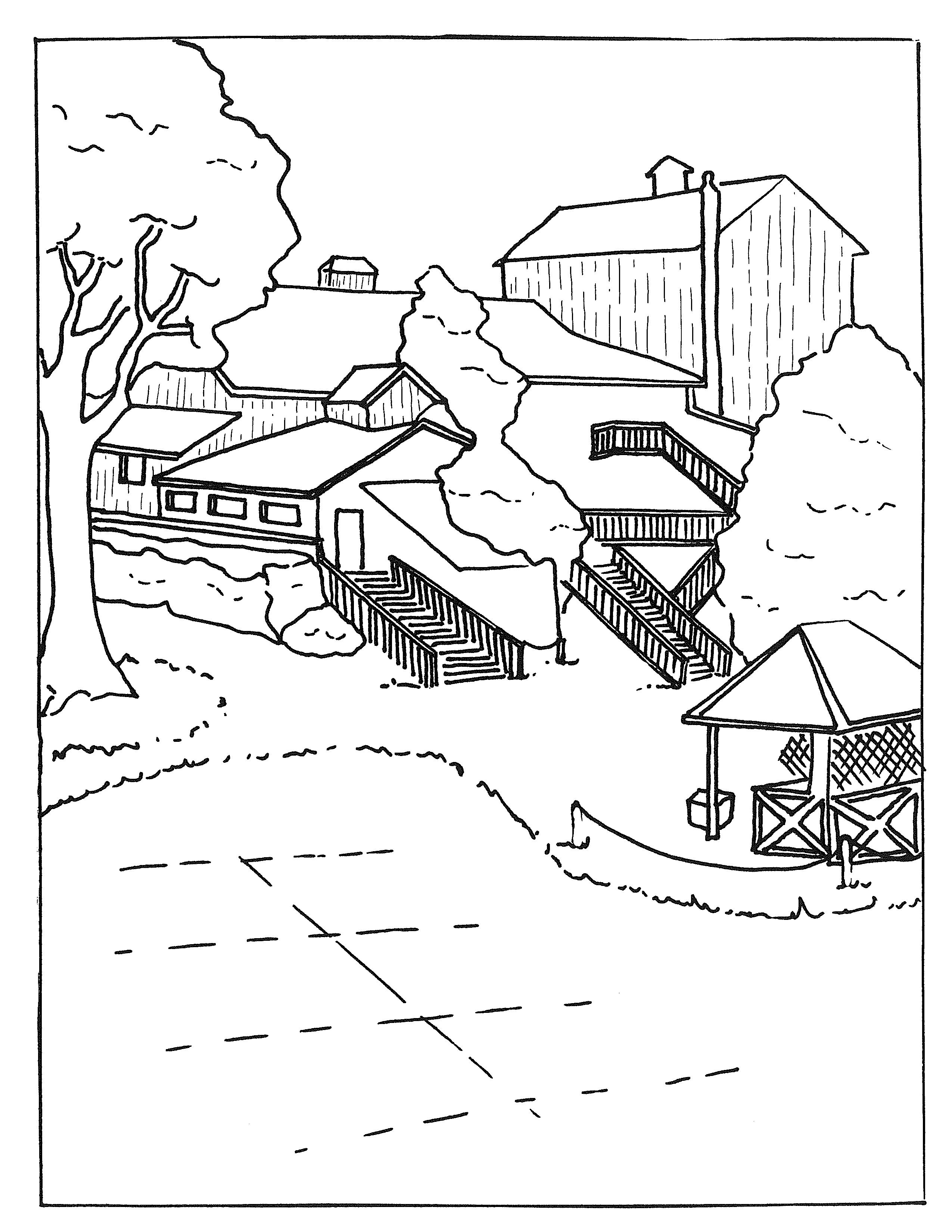