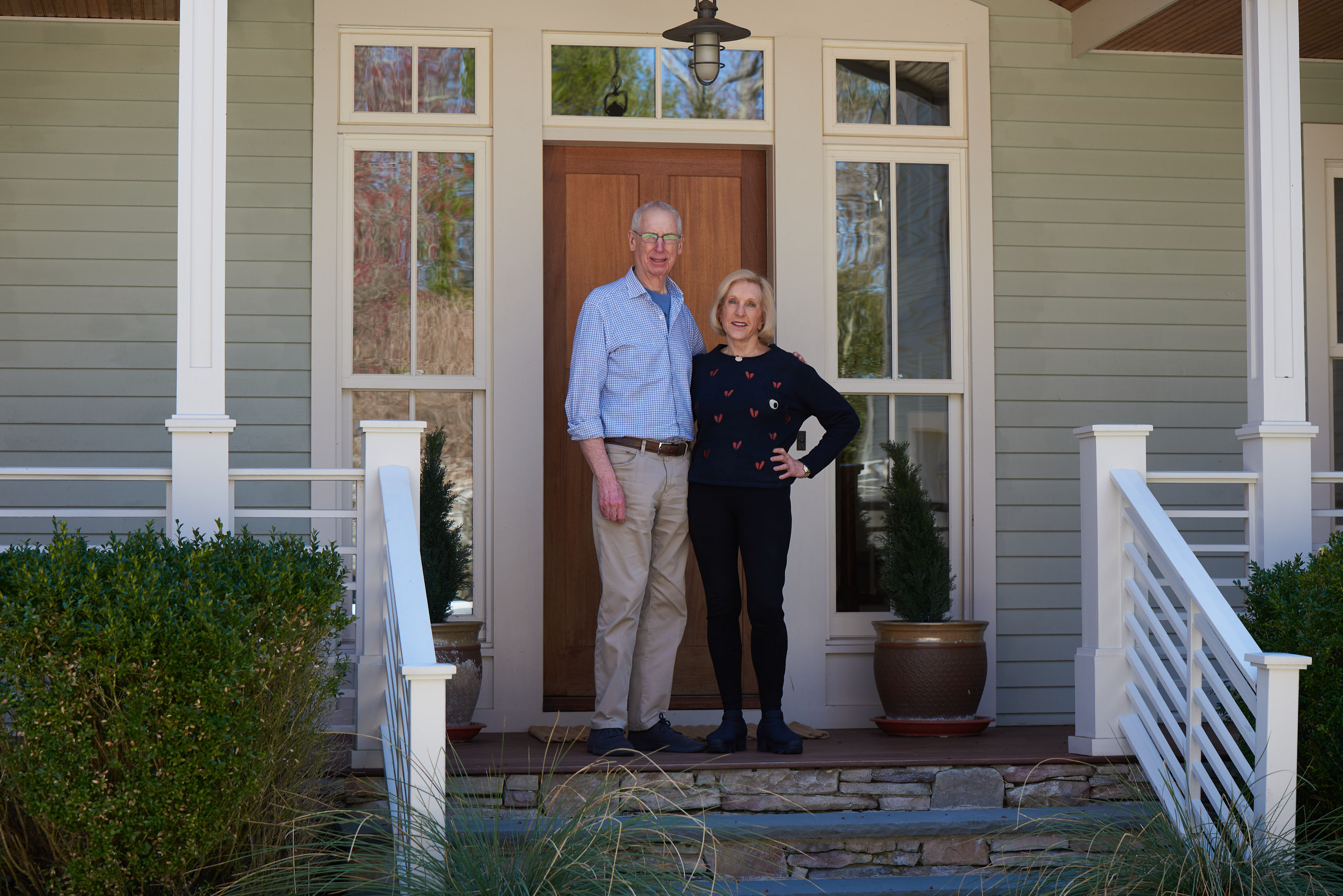 Jay Dirnberger and Molly Alger moved to Westport from New York City 11 years ago and quickly became integral members of town life, lending their time and efforts to numerous local nonprofits. Molly is a retired management consultant and Jay is a retired institutional investment portfolio manager. A highly decorated Vietnam War veteran, Jay was a helicopter pilot in the Army’s, First Cavalry Division and was later in the 18th Airborne Corp at Fort Bragg. He is the recipient of the Silver star, Bronze Star, Distinguished Flying Cross, twenty-three Air Medals and the Vietnamese Cross of Gallantry. You can see and hear Jay’s American Memory interview with the Library of Congress here.

“I often hear people use the analogy of wartime when it comes to the situation we’re in. Drawing the comparison idea of fighting a war in your own country doesn’t apply here—the last time that happened was the Civil War, so we have no recent collective memory of that. Except for the caregivers, the war analogy is too broad, in my opinion. However, there is a sense of community behavior to support a common goal but it doesn’t seem to me to be close to a war situation. I do think there is some analogy to the Depression that is applicable.

I take this seriously—and have since the beginning—but, at first, I’d say Molly took it more seriously than me. In February and March there hadn’t been a lot of info about people who have been sick and gotten better. Not knowing that was demoralizing. As I’ve been learning that some people have had it and didn’t even now or those who did know and were sick but still survived—that statistical knowledge holds out hope. However, there is the worry of “silent transmitters”.

From my professional point of view: In the long term, I think that the economic impact could be resolved fairly quickly. The economy will rebound–it’s the jewels of town that may be affected in terrible ways: The schools, The Westport Museum, The Library and The Playhouse. The brand-new businesses that just got started will be seriously harmed. On the other side, there risk-takers—the entrepreneurs– those who were supposed to start new businesses or about to buy real estate and didn’t, who are going to raise their head up and think “I dodged this bullet.” There is no doubt that Westport will take a fairly serious short term hit because of the amount of cases we had here, but eventually schools will reopen, the Playhouse and Library will survive and they’ll be strong as ever. Families will want to come here and live.

Personally, our greatest impact is that we can’t do the volunteer work we both love. I am part of the Y’s Men and on the finance committee at the Westport Museum as well as on the board of The Playhouse. I’m also a school mentor within the international refugee community in Bridgeport. I miss that a great deal. Molly is on the board of the Friends of the Senior center and is Secretary of the Westport/Weston Community Emergency Response Team which augments emergency services during crises. Molly is practicing with the Community Band playing her alto saxophone. She hopes to participate next season. This situation is different now—volunteers can’t be put on the front lines and at risk so we are finding different ways to help.

We walk a lot. We’ve always been walkers but we do more now. Usually we about 3 miles a day. We take a certain path and we see people in neighborhood. We cross to separate, but we still smile and greet each other.  It’s responsible behavior and it’s a shared experience that particularly reminds me of living in Manhattan those first few days after 9/11–when you ran into anyone you would say “did you lose anyone” “are you ok?”