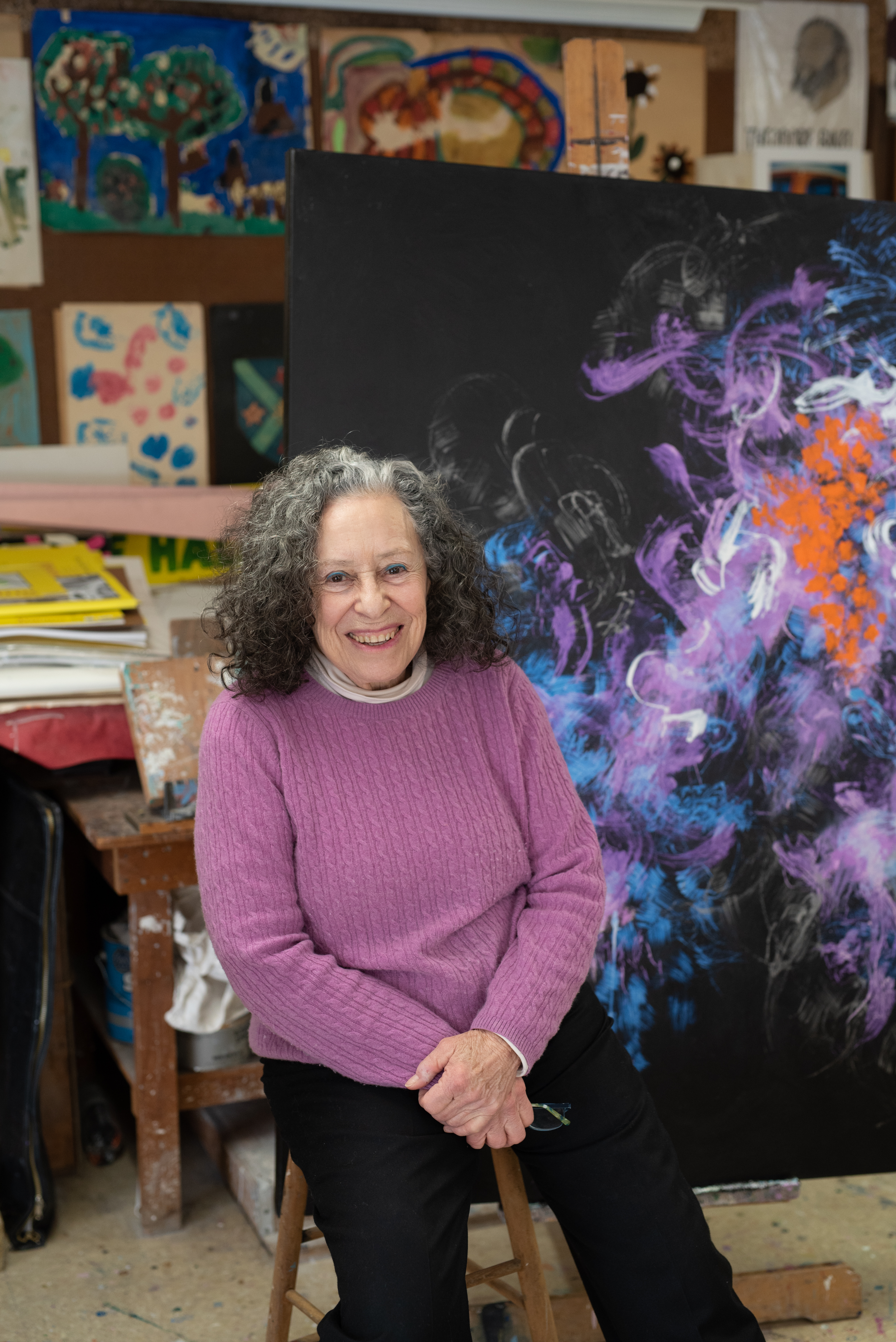 Roe Halper was born Brooklyn in 1937 and was raised in White Plains. She studied art at Vassar and Skidmore and became an art teacher and in 1960 she and her husband Charles moved to Westport. A successful artist throughout her life, Roe became known for her low-relief woodcarvings portraying the Civil Rights era including the Birmingham Series which she was inspired to create in response to the events happening during the 1960s. An inspired creative who draws inspiration from the world around her, Roe Halper has worked in various mediums from paper to wood to kinetic sculpture, flowers to book-printing and more. She has taught art classes from her home studio for more than 40 years.

My husband and I were very young when we decided to move to Connecticut.  I was 23 years old. That was in 1960. We came here to be far enough away from both sets of parents. It was a toll call, but near enough so they could visit and not sleep over. We moved to Westport because the New York Times Magazine had an article about buying Longshore Club. My husband was a par golfer and this is the only way we could afford for him to be able to play golf. Even though we didn’t have kids, we knew we were going to have them so we might as well be in a place which had the best school system. But the third thing was that Westport had an arts community. Now it’s true that The Famous Artists School had a philosophy of education that was completely against what I was taught as an art educator but it didn’t matter. It was a gathering of artists.

We lived in a little cow barn on Newtown Turnpike. That first year maybe I did four pieces, maybe, because woodcut printing took a long time. And I would put a drop cloth over a table in that living room and that’s how I worked. Later we got a little house on Bayberry Lane. In that house I at least had a 9 by 12 room to work.  I was so thrilled. We filled up the other bedrooms with kids in the next few years. I’d always take off nine months after they were born, to be able to be with them and bond with them. When I became impossible to live with, my husband would say, “get thee to the art room” to get rid of all the angst. We were there for nine years before we moved to Little Fox Lane where I built this beautiful studio downstairs — 31 feet long and about 16 feet wide. It’s really beautiful and big enough to have classes.

I have been teaching for 42 years. In my studio, sometimes I had as many as 17 kids over two days. My program was first, to have design in every project they did. Secondly, I could bring in nude models twice a year. Although the men weren’t totally nude – they wore a bathing suit–– but the women were totally nude. Because all artists have to learn how to draw nudes.

I’ve never counted up all the students I’ve had, but I’ve had a lot of them come back to me and say that this was the one time in their life they didn’t have an assignment. They didn’t have a mark. They only had encouragement, and they were seeing an artist working at the same time. So, it’s been wonderful.

This year, I began to get calls asking if I could teach in the summer because the schools and camps were closed. So, I began to teach morning and afternoon in July, and then in August, only in the morning. I was doing classes in person outside my studio. The tables and easels were all outside my studio. If they came in to get supplies, they had to wear a mask.  I took a week off in September when they started Staples to figure out if they could manage it, and I ended up with four kids until a week before Thanksgiving. It was wonderful. I will hopefully do it again as soon as it’s warm. If I don’t, it’s okay. At my age, I don’t need to do this full time.

Westport has had great impact on my art.  I met all the artists in town at many democratic functions. I was so young, then. We’d bring over work and they’d sell it and it would help the cause. And I met Tracy Sugarman, Leonard Fisher, and Stanley Bleifeld. They were all about 15 years or so older than me. And they were fabulous. Stanley as a sculptor, got me into sculpting. These three guys were like mentors to me. And I appreciated that they encouraged me. And of course, Tracy Sugarman was very involved with the civil rights movement.

In the 1960s the civil rights movement was a very, very important part of my life, as was the anti-war movement. Well, I was stuck at home with babies. We had one car. I wasn’t going to march. It wasn’t my thing. I was viewing the world and I was expressing how I felt. I did several paintings of the anti-war movement of suffering soldiers. And I did woodcarvings, not woodcut printing, but the carvings themselves. I did the Birmingham series in 1963.

I did not have Dr. King in mind when I did the Birmingham Series, I was interpreting the events. The first block was violence to the Blacks, the second block did have Dr. King in mind “what shall we do to react against the violence”-hence the Martin Luther King approach. The third block was ready to fight back, but although I show fists, it is only to reflect ‘fighting back’ because Dr. King was non-violent.

Martin Luther King was going to speak at Temple Israel on May 22nd, 1964, a month and a half after I gave birth to my daughter. Sue Rubinstein, the Rabbi’s wife, called me up, and she said, “I want you to bring over all of the civil rights work that you’ve done. And we’ll put it in the library, and he’s going to have Sabbath dinner here.” I said, “If he wants anything, I’ll send it to him.”  Well, he did. He was thrilled to get the Birmingham carvings. And after he spoke, which was brilliant, Chuck and I went to meet him afterward privately. He invited us down to Atlanta.

In 1966 we went to Atlanta to the Southern Christian Leadership Conference. But the woodcarvings weren’t there. We were told, “Oh, they’re at the King house. Because Coretta King had come in and said you cannot have one of them in Andrew Young’s office, one of them in Ralph Abernathy’s office and one of them in Martin’s office. They have to be together because together they are powerful.” And they were hung right at the entrance of their home in the foyer. And when we got there, I met Coretta King–that was one of the greatest days of our life.

I met Dr. King once previously in 1966 when he returned from Chicago feeling down about SNCC–the Student Non-Violent Coordinating Committee–that  wanted action now.

In 1968 on April 4, when King was assassinated, I was watching TV with the kids. And my son was six, and my daughter four, and I started to cry. And my son said, “Why are you crying mommy?” And I said “Because a great man died today.”

I’m very lucky. My kids live in Weston. We are connected. I’m very connected with my four granddaughters. And I also have three step grandchildren. I’m lucky. That’s all I could say. It’s true, I had Passover all by myself. But I was able to have Thanksgiving with my daughters and their families. They were all free of COVID so I could do it. I can’t wait to get my shots. When I do my cousin and I are going to meet together because she is about three weeks ahead of me and we haven’t seen each other in a while. I don’t think I’ll go back to indoor swimming. I just don’t think it’s safe still. I’m not happy about it. It’s a risk I don’t need to take. I’ll just keep walking outside. I walk a lot outside.

I’m the first one to tell you that I’m very prejudiced against Trump and had been forever — since he hit the scene. But I feel very optimistic when I hear people like Biden and Kamala Harris, who is so intelligent. They, they have the brain power. Let’s hope that they can get the backing of people to improve life.

I have always been very upset by the suffering of humanity. I thought when I was young that I could really make a difference. I think I have with teaching, probably because it’s very one-on-one. I’m very interested in giving the students confidence. And I know that my art has meant something. But it means something different to every person who sees it.