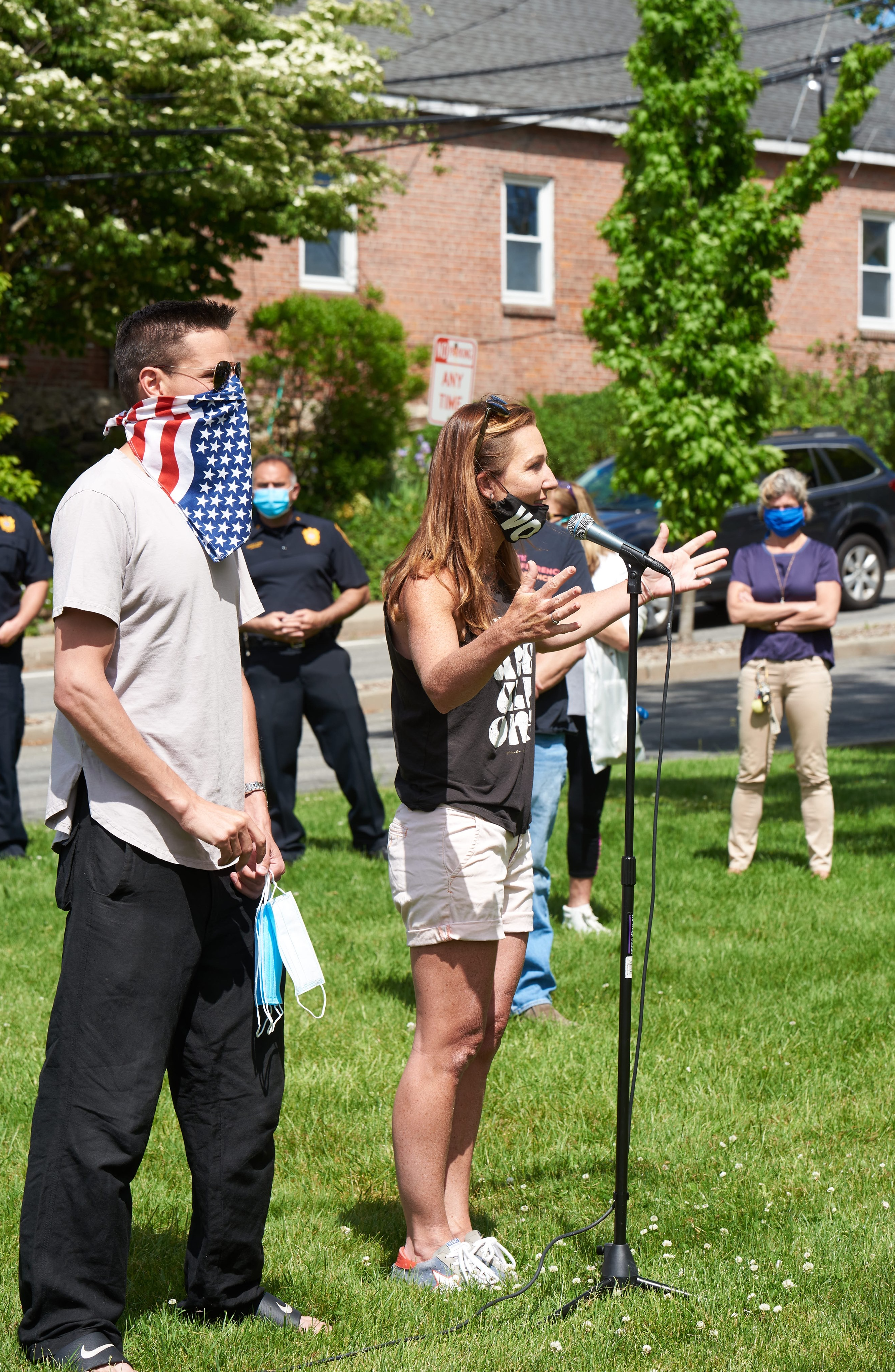 Darcy Hicks is a well-known figure throughout town—an activist and artist who moved here with her brother and mother, who is also an artist mom, in 1978. Darcy went to Hillspoint Elementary, Long Lots Junior High, and Staples High School. After leaving for college, grad school in Boston and a career in NYC, Darci moved back to Westport when she married her high school boyfriend, attorney Josh Koskoff. The couple have raised their three boys in town.

“In my years in Westport, I have known so many good people who truly care about those less fortunate. But the bubble is real, and so is the desire, however subconscious, to stay inside of it. So, the words haven’t always turned to action. Humility is not America’s thing, and yet without humility we can’t change how we see things. However, lately I’m seeing the bubble in Westport get thinner, and people are listening better. This gives me hope.

I want to be careful about belittling the effects of COVID in Westport because I know many people have been suffering the effects – physically, psychologically, and financially. But we are all so lucky. Just a few miles south and north of us, our neighbors are unable to socially distance because of congested living situations, because they cannot afford to stay home from work, and because they are often the essential workers we need to help us function. And many of them have lost their jobs as their struggling workplaces have shut down – so the students I work with in Bridgeport, for example, are simply hungry all the time. That’s the reality of COVID for so many.

With respect to COVID, I’ve caught myself being less careful in the last week or so, especially as I feel the urgency of speaking out and participating in protests for Black Lives Matter. Also, we are social beings, and for many this has been either a lonely stretch of time or a claustrophobic family time. As the weather gets nice, of course, we all want to get out and see our friends or go to the beach and be among other people. But I am very worried that we have been impatient and in denial. The thing that really drives me crazy is the people who say they aren’t worried about getting it so they are willing to “take a risk.” They are ignoring the very real fact that many of us are asymptomatic carriers, which is like being armed with a weapon that has its own mind. We can be giving it to those who are susceptible to dying from it. It’s so important to try to think about other people right now.

Westport has two mouths. Out of one, we preach tolerance and inclusiveness – and that is not nothing. And, we have walked the walk, a bit. For example, unlike so many other wealthy suburbs, we provide housing and services for the homeless, for lower-income families, and for people with disabilities. However, the other mouth is simply that: a mouth. Being mostly white and wealthy, we have this remarkable ability to rest on our laurels. We post the right sayings, go to the right protests, and then close the blinds on the rest of the world. It’s not enough. You don’t have to be a confederate flag-waving white nationalist to be part of the problem. In fact, resting on your words or your beliefs – without actually fighting for change – is the systemic racism which allows for what we see on our screens. I can sum it up with this anecdote: shortly after Hurricane Sandy devastated our shorelines, people in Westport were incredibly responsive. It was beautiful to see throngs of people at the beach, raking people’s houses and yards free of sand. A week later, I put the word out that there was a project community in Norwalk that had literally been underwater, and again, the response was so generous. I collected gift cards, furniture, and at Thanksgiving many people cooked extra turkeys and sides since the residents of the project lost their kitchens in the flood. But: I could not get a single person to come with me to deliver the items! I made eight trips because people were so generous – but they were also generous with excuses as to why they couldn’t join me to meet the people who lived there. Until the people who live in the comfort of towns like Westport meet people from towns like Bridgeport, they will not understand how similar we are, and how different our circumstances are. What they would have discovered is that many of these people who were so destitute were sharing the food we donated with the homeless that lived on the streets outside their project. They were as giving and as compassionate as we are, and I was sad this beauty was not seen by Westport residents.

I think we are moving in the right direction. Every debate and every argument pushes us forward. Sometimes the smaller arguments online – the shaming, especially – can set us back. But we are a lively town, willing to share our thoughts. I’ve always loved that about Westport. This engagement is what moves the dial and allows for creative thinking.

I think that most women, actually, have had to learn to be patient, hopeful, and hardworking in order to get through life’s challenges. So as a woman who has, like all women, dealt with sexism in school, in the workplace, and in social circles, I feel equipped for obstacles. On a personal level, I’ve experienced family tragedies and trauma. These times seemed insurmountable, yet here I am.

My fear stems from the scapegoating and vilifying of particular groups, whether it’s by race or by uniform or by income. It is distracting us from finding solutions to gun violence, systemic racism, climate change, and the pandemic. Because one thing we must do now is VOTE. We MUST get Trump out of office or he will dismantle the few protections to our country and our planet we have left, which are fewer every day. Most urgently I think climate change needs to be addressed so we can all live long enough to fight the rest of the world’s ills. My hope is that we get every soul in this nation to vote in November so we can avoid the iceberg and focus on repair.

I love this town. When you are a parent, you don’t see your child as someone that should be doing things for you. You see that child as someone you should be nurturing and helping to become a good, compassionate person. When they disappoint, you don’t abandon them. You correct them and admit that maybe you also need to correct yourself. I hope that people can see Westport – or anywhere they live – in this way. It’s not here for us… it is here BECAUSE of us.

One thought on “Focus On: Darcy Hicks”