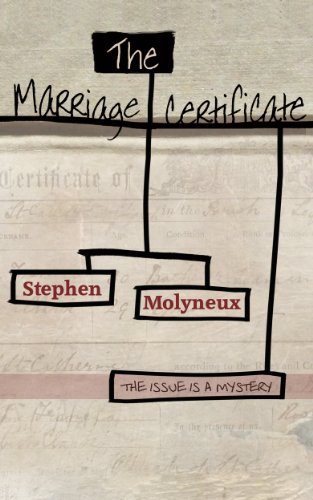 A review of a classic Twilight Zone episode, rediscovering Great Expectations, and a novel for genealogy nerds.

If you are a genealogy nerd, like I am, this book has a little bit of everything you’ll love. The main character, Peter Sefton, is an amateur genealogist who finds a marriage certificate from 1900 for sale in an antique mall. Why would he purchase it? As a person who knows how hard marriage records can be to find, I know exactly why he bought it: He knew there was someone who was going to be interested in it, and he just had to find them! With that purchase Peter’s adventure begins. Through twists and turns, he researches the couple identified in the certificate and finds out that a professional firm is also researching them because someone’s financial future is at stake. The story shifts perspective from Peter Sefton to the maid of honor at the marriage in question, whose own journey helps to shape the story playing out over 100 years later. This novel features a marriage, an accident, a gruesome death, and genealogical research–what’s not to love? With plot twists and intrigue waiting around every corner The Marriage Certificate was a page-turner that I couldn’t put down. Highly recommend for anyone who loves a good mystery and if you’ve got the genealogy bug like me, you’ll love it even more! Now I’m just waiting for the movie adaption! Download on Kindle Unlimited for free!
Book Review: The Marriage Certificate by Stephen Molyneux Sara Krasne
Great Expectations takes place over nearly thirty years from 1812-1840 and is about an orphan named Pip who struggles through life as a member of England’s underclasses. We follow him through his younger years where he meets mysterious criminals in graveyards and as he falls in love with the upper-class girl, Estella. Later when he comes into a great sum of money from an anonymous benefactor, we join Pip’s new quest: To become a gentleman. This book is detailed and thoughtfully written. It will leave you astonished about the way of life so long ago. You will fall completely in love with the wacky characters that help Pip through his journey. No stranger to hardship in his youth, Charles Dickens used his novels to reveal the desperate plight of those who were most unfortunate in his society. This 19th-century novel is an international classic and definitely worth your time to read.
Classic Book Review:
Great Expectations by Charles Dickens  Staples Sophomore, Sydney Griffiths
Among Westport’s notable residents was writer-producer Rod Serling whose famed television series The Twilight Zone invited viewers into the shadowy interstitial realm of the “Fifth Dimension” where inexplicable–and often odd–things took place. In the 1960 episode entitled A Stop In Willoughby, Serling paid homage to Westport in both subtle and overt ways. The main character, Gart Williams, is a beleaguered and disillusioned ad-man with an overly-ambitious wife. Each night Williams takes the commuter train home with (pre-climate change!) November snow swirling outside its windows. When he dozes off after the conductor calls “Stamford!” he has a lucid dream about a stop called Willoughby where it is sunny and warm (the new conductor tells him it’s July) –but it is also 1888. He awakens just before the conductor calls “Saugatuck-Westport!”
At home, Williams quarrels with his ambitious wife, Janey, noting that “Some people aren’t built for competition or big, pretentious houses they can’t afford, or rich communities they don’t feel comfortable in, or country clubs they wear around their neck like a badge of status.” After telling Janey about his peculiar dream on the train she angrily retorts “You were just born too late! You’re the kind of guy who could be satisfied with a summer afternoon or an ice wagon being drawn by a horse.” (Sounds like our kind of guy!) Vowing to eventually get to Willoughby, Williams looks forward to his evening commute and his dream-land visits to the idyllic 19th century town but then, in true Twilight Zone fashion, things take a bizarre turn. A Stop in Willoughby and all other episodes of the Twilight Zone are available as part of Hulu and Netflix streaming plans.
Classic TV Review:
The Twilight Zone, A Stop At
Willoughby Ramin Ganeshram