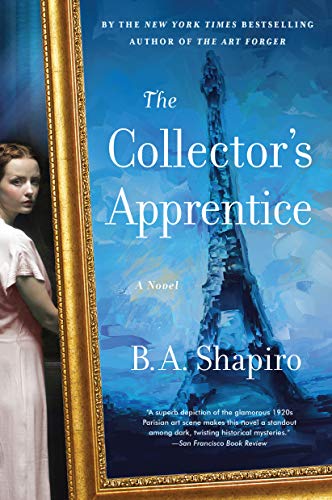 Leave a comment May 13, 2020 virtualmuseumwestport
Jerks in Connecticut History is an entertaining introduction to some of Connecticut’s most infamous characters, including circus man P. T. Barnum and the treacherous Brigadier General Benedict Arnold. Each chapter focuses on a single figure from the Nutmeg state’s past, whose personalities certainly prove themselves to live up to title, and recounts their notorious antics. While the profiles are comical and might be a good first read for casual audiences, those looking to get into the true stories of these individuals would be better served in picking up another piece of writing.
Book Review: Speaking Ill of the Dead: jerks in Connecticut History Nicole Carpenter
I’m an art lover but never counted myself as a person interested in the ins and outs of how art is collected or curated. The Collector’s Apprentice opened up what I soon learned was the fascinating world of artists, agents, collectors for me.
Set in the 1920s in Paris and Philadelphia, the book makes use of many true facts about the world-renowned Barnes Foundation in Pennsylvania– widely considered one of the most important catalogs of modern art in the world. Barnes was a visionary who saw the value of modern artists we accept as masters today but who were mocked in their hearly careers: Matisse, Picasso and others. —Both a museum and educational institution, the Barnes has also been the focus of controversy over its nearly 100-year history.
In B.A. Shapiro’s novel, the Barnes becomes the “Bradley” and Dr. Barnes becomes Dr. Bradley. The institution’s struggles also take the stage while main characters are thinly veiled versions of their real-life counterparts. A good number of the book’s events are only barely altered from life. Real individuals such as Matisse, Gertrude and Leo Stein, Alice B. Toklas, Zelda Fitzgerald and Ernest Hemingway also make appearances.
The plotline centers on protagonist Pauline Mertens/Vivienne Gregsby who runs from the scandal and ruin she brought upon her wealthy Belgian family and then reinvents herself as apprentice to Dr. Bradley. But Vivienne finds herself in the midst of more scandal as his right-hand woman. The Collector’s Apprentice has sex, scams and murder all of which make for tantalizing reading but these were not the most thrilling parts of the book. Instead, seeing giants of modern history with all their human foibles rather from behind a velvet museum rope beyond which their work is hung, was exciting and inspired me to read and learn more about their world. The Collector’s Apprentice will appeal to art-lovers, aficionados of the Roaring Twenties, modern art mavens and anyone who likes a good story.
Book Review: The Collector’s Apprentice  Ramin Ganeshram