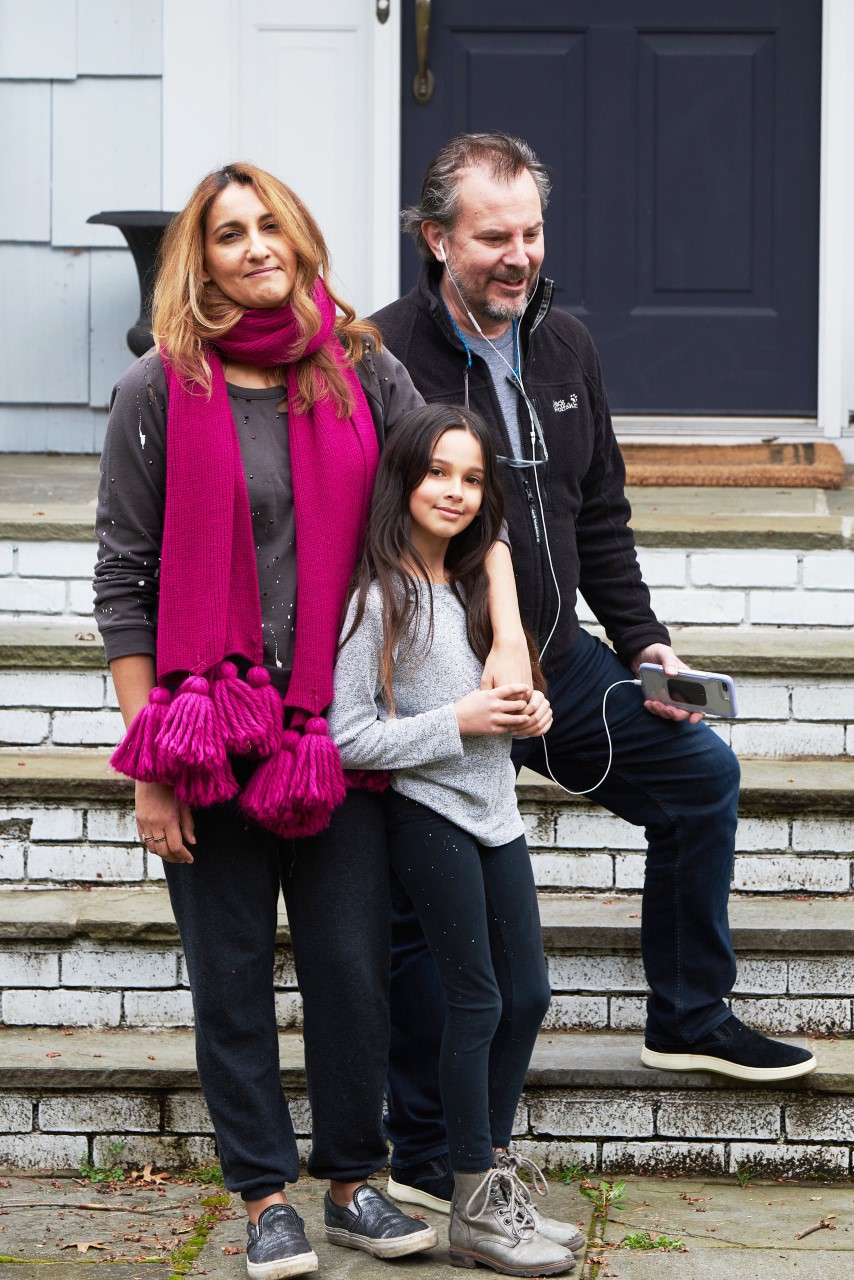 Navida Greifenberger has lived in Westport with her husband and almost-9-year-old daughter for 8 years. She is the founder of the Facebook Group Westport Coronavirus Info, a page that provides information to members about all aspects of the pandemic here in town.

Between homeschooling, and making masks and managing the Facebook group I set up, I’ve been keeping very busy. The days are flying by.

On Westport Coronavirus Info people discuss basically anything related to how it’s affecting the town, their lives. Social distancing was a major topic. There’s lots and lots of people seeking information on testing and where to get tested and how to get tested. Lots of people are looking at just the numbers and there is a fear factor.

More recently, which is really sad, we’re seeing more posts of people who actually have loved ones who are sick and seeking donors for plasma donations. And then other assistance from people who have loved ones in hospitals, and they’re seeking PPE equipment. Today we had someone asking for wipes and bleach from Norwalk hospital. It’s really just a bulletin board that people are coming for help, to air their concerns, to find out information, because everything’s changing all the time. Yes, I’ve definitely seen some trends around what things are being posted as time has gone by.

Through Facebook, I’ve also been taking requests, to make masks and I’m trying to get them to people who are exposed and in exposed positions, but not necessarily at the top of priority list at the moment. I’m actually sitting in front of my sewing machine right now. I’m making a batch for CLASP, which is the organization that takes care of disabled people. I also have a bunch that I’ve been making for a nursing home. And then I’ve been making them for various medical professionals who have reached out to me. They’re all in exposed positions but they’re not really in a position to be able to be on the top of the priority list. I think it just helps you mentally get through this, you know, feeling like you’re contributing in some way, even if it is a small way.

What I miss is going outside and not being able to work anymore. I do a little bit of freelance work, working with small companies helping them with their marketing and operational type issues. It’s definitely reduced the amount of work I have. I have a lot less work than I had previously. I initially provided some advice to my clients from ways in which they could take their business more online, but now they’re all just hunkering down trying to get through this. And I’ve just accepted that I’m not going to be working much through this period. I’m one of the lucky ones who doesn’t rely on my particular income to pay the bills, so I’m not too worried about it in the short term.

I do like to see my friends fairly regularly and not being able to see them has been a big blow. I’ve been doing everything and anything to stay in touch with people. Zoom, and the Houseparty [app] that I’ve never even heard of before but mostly Google Hangouts, FaceTime, you know, anything and everything that anybody wants to use to get connected.

I think people are understandably very worried, and you see a lot of fear and uncertainty. And I think that’s just the same as it is all over the country and all over the world. I think the one thing about this community– I’m sure it’s in other communities too– but I really did notice in this community, is that immediately as soon as things became apparent that the community had been affected, you immediately saw people stepping up and wanting to find ways to help and reaching out to people and setting up various types of support mechanisms. I’m always amazed by that in Westport. I think that whenever there’s any kind of untoward happening, everybody steps up and tries to find ways to help everybody else.

I think in my personal life, I’ve experienced a lot of different environments and a lot of change so change doesn’t frighten me, change of circumstances doesn’t worry me. I’ve also gone through some strange experiences. I don’t really want to go into them in detail, but I’ve experienced bomb blasts and you know, listened to bomb blasts as a child and having missiles flying over my head. And I feel like those sorts of experiences kind of make you feel that when in times of crisis, you know that you’ll probably get through and you just look for ways to move forward. I think I’m more of the mindset of “okay– this has happened, and now what do we do about it?” rather than just getting into panic about it.

My greatest hope is that it’s going to be over as soon as possible without too much disruption, which I think is everybody’s hope. And my greatest fear is just how much havoc it’s going to wreak and how long lasting of an impact is going to have. Is it that we just have to bear the brunt of it for a few months and then everything goes back to normal and the economy recovers and, people go back to their lives? Or is this just going to be a cycle that goes on for a longer period that leaves devastation in terms of unemployment and people losing their livelihood and people dying? And that’s my biggest fear is that this goes on for a lot longer than we’re hoping. “