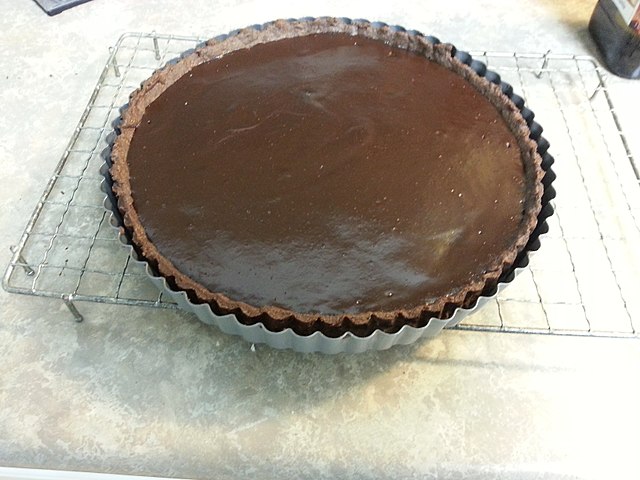 It may be surprising but chocolate cream pie, or chocolate tart was a common dessert during Colonial times. Chocolate arrived in America via the West Indies and was used in drinking chocolate (cocoa) and the shells of the cocoa beans were used to make a light tea.

Eighteenth century chocolate was far different from what we know today—it was a grittier product and usually flavored with spices like nutmeg, cinnamon, and allspice in a recipe similar to traditional Central American and Mexican preparations. The smooth, creamy chocolate we know today wasn’t available until later in the 19th century when machinery was invented to grind the pure cocoa paste more finely and add back cocoa butter and sugar during the refining process.

Chocolate Tart recipes are quite common in cookbooks of the period such as Englishwoman Hannah Glasse’s 1747 book The Art of Cookery Made Plain And Easy. Modern readers might be surprised that Glasse’s recipe (and most others of the time) calls for rice flour which is used as a thickening agent. Rice and rice flour were commonly used at the time since rice came to England and later America, via the robust British trade with the East and West Indies. Later, rice was grown in the southern American colonies as well. This recipe uses cornstarch as a more effective thickener however you can harken back to tradition and substitute rice flour instead.

Traditionally this tart would have been served with a sugar crust on top like a crème brulee but we prefer to serve it with Chantilly cream (sweetened whip cream). You can find that recipe here.

Check out all of our historic recipes here!