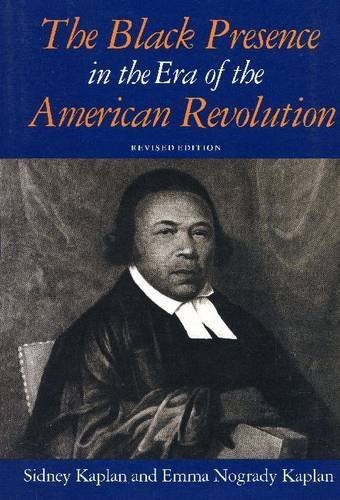 Leave a comment April 23, 2020 virtualmuseumwestport
Although the earliest years of American history are often presented to us through the singular view of the patriot story, history tells us that those who lived during the American Revolution were a myriad and complex group. We know for example only a third of the country supported revolt while another third remained loyal and yet another third remained ambivalent. The Black Presence in the Era of the American Revolution offers yet another lens onto the experience of Americans during this era. The book explores the experience of African-Americans, brought to the colonies as enslaved people and then largely denied citizenship in what would become the new nation. Author’s Sidney Kaplan and Ellen Nogrady Kaplan tell this complex history beginning with Crispus Attucks, the first victim of the Boston Massacre and then explores soldiers and sailors on both sides of the conflict, clergymen, businessmen, artists and public advocates. This richly compelling though historically rigorous work will offer readers a new view on the oft-told stories of the American Revolution.
Book Review: The Black Presence in the Era of the American Revolution Ramin Ganeshram
1776, as the year implies, the book chronicles many of the key military events (Siege of Boston, Battle of Brooklyn, Battle of Trenton) at the outbreak of the American Revolution in 1775 and 1776. It also profiles many of the individual personalities behind these serial engagements. It is an excellent work made even better with a side by side read of David McCullough’s Pulitzer Prize winning biography of John Adams. McCullough has a fantastic way of taking extremely well-researched source material and bringing it to life in a style that will remind you of your favorite college professor.
Community Book Review:
1776 by David McCullough David Krasne